“The European Union is the only viable alternative for further successful development in Europe,” agreed personalities of the 29 November 2016 who discussed the future of the old continent at the international conference “New Europe 2016” at the Smolenice Castle. Nearly one hundred participating guests and speakers mainly from Central and Eastern Europe, as well as from other countries, sought answers to questions about current social, political and economic transformations in Europe in the context of other developments in the European Union affected by the current Brexit, migration wave, changes in economic and social conditions, security risks and the threat of terrorism on the old continent.

At the beginning of the conference, the former Polish President Bronisław Komorowski emphasizes that we should not be subject to the pessimism, we should not resign to crises that trouble Europe. “Immigrants seek a better place to live in Europe but cause concerns of losing European identity. In Poland, we have not a single one immigrant but we are afraid all the time,” he spoke to the participants of the conference. According to Komorowski, “it is not worth it for us to build a “new” Europe, rather we must seek new and modern thinking, which will replace the old one. Brexit weakens the authority and potential of Europe. We are susceptible to manipulation, populism and also we show the national egoism.”

Nobel Peace Prize laureates and the first post-revolutionary president of Poland Lech Wałęsa had a think about whether the European Union needs to be “repaired” or “build up a completely new one”.

Ivan Gašparovič as a former head of state at the conference emphasized that Slovakia owes to the membership in the European Union for economic growth, improvement of the social conditions, respected foreign policy. Within the context of development in Europe and the world he brought the attention to the growing risk of global conflict. “We are losing interest in cooperation and look for problems in the world, that we deal with in our own peculiar way, whether somebody likes it or not, today there is the cold war again and we build barriers,” it was said in the contribution of Ivan Gašparovič.​

“The collocation “New Europe” gives the impression that we expect a different Europe, a Europe amended and qualitatively different from the old, traditional and time-proven Europe. The Europe we used to live in and still live. And because our world is dominated by progress, somehow automatically we expect that the new Europe will be better than the old one,” said Jiří Weigl, the Executive Director of the Vaclav Klaus Institute. Eurozone crisis – and especially Brexit – showed that the EU in this form and without major changes cannot stand ground.

According to the head of the European Commission Representation in the Slovak Republic Dušan Chrenek, the European Union is damaged by the disinformation campaign and the most serious damage is caused by a loss of confidence among the countries and its citizens. As he stated, the situation in the EU is not ideal but despite the imperfection it still is the best projects we have. It is up to us to develop, strengthen and protect it. “But the reality is that European integration is not a cure-all and is not perfect. Its successful progress requires a sincere willingness to cooperate but also the patience,” said Chrenek.

On the occasion of the international conference New Europe 2016 the head of Slovak diplomacy Miroslav Lajčák greeted the participants, who stated in his letter that he sees the event as a debate about what direction Europe should continue to take. “Today we increasingly think about how to support the faith of citizens in the historically exceptional European project. The EU is not perfect but it is the best tool for dealing with new challenges. And I am convinced that we have no replacement for it,” said the Minister.

According to the President of the conference New Europe 2016, the scientist and entrepreneur Professor Štefan Kassay – the idea to organize this international event began as an effort to contribute to the Slovak Presidency of the EU Council in the form of an open and professional discussion about a new shape of Europe. “I am convinced that this open debate on the future shape of Europe finds its use on a permanent platform of the Professor Štefan Kassay Foundation for Science and Education with the title “New Europe”, that will gradually present these ideas and opinions in its publications, on its professional events and on the www.neweurope.sk website,” said the main organizer of the conference.

President of the Slovak Academy of Sciences Pavol Šajgalík emphasized that a significant political, scientific and economic representation have met at the conference. Between politics, economy and science there is the right potential that can deliver the conditions for new ideas and also their implementation. As he added – in this triangle the new ideas that will bring a benefit to our society and across Europe can develop.

President of the European Academy of Sciences and Arts Professor Felix Unger emphasized in his speech that we must believe in Europe but we need to find the right balance between its East and the West. “I see a gap that we have to overcome. I am disappointed that even after such a long time after the fall of the Berlin Wall this gap still exists,” he said. 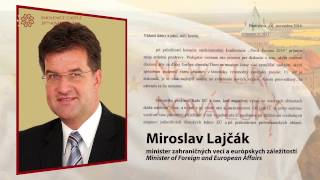